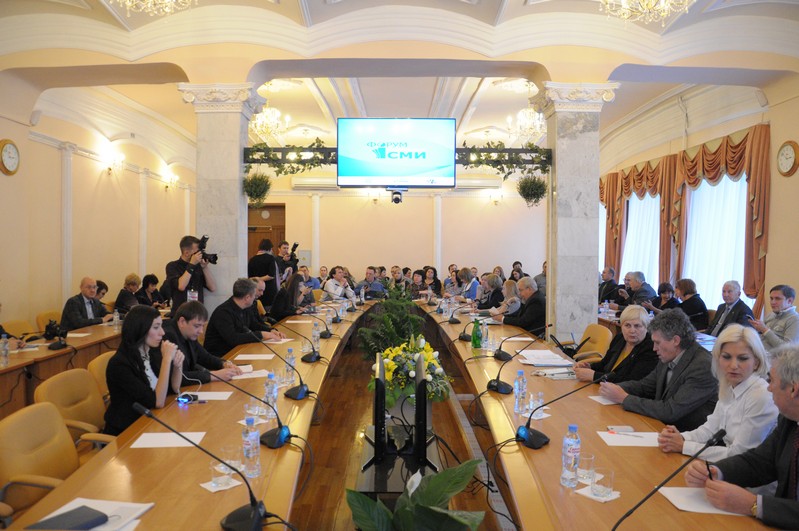 On the 6-7th of December the University hosted a forum of regional media, which was attended by representatives of the city, regional and district newspapers, news agencies and TV channels. Discussion platforms, round tables, trainings and seminars "Unique format of the local editorial boards”, “Media for a youth audience in Russia: development trends", "Visualization or illustration?", "Game format as the means of creating unique content" were held within the forum.

Governor Valery Radaev spoke at the closing ceremony of the forum of the Saratov media.

The media were called the active driving force by the head of the region. "The profession itself requires journalists to be at the front line, to respond immediately to all hot topics. Often you stay ahead by helping the authorities to pay attention to selective problems of the population, at arrearages of work", — said Valery Radaev and thanked the journalists for this work.

The ceremony of awarding prizes and scholarships of the Governor in journalism took place according to the outcomes of the work, it is an annual support provided to veterans of the media and those who make first steps in the profession. Awards were given to the permanent head of Perelyub Newspaper “Tselinnik”, author of the series of local history books Yuri Ivanovich Bychkov and the correspondent of "Big Volga" newspaper of Saratov region Tatyana Nikolaevna Sapunova. The young generation of awarded was presented by the students of the Institute of Philology and Journalism of Saratov State University Andrey Muzalevskiy, Bulanova Alena and Artem Ryabov.

Deputy chief of information programs of broadcasting GTRK "Saratov", repeated winner of All-Russian competitions "World law" and "Teleprofy" Aleksey Loshchinin received the award named after Nikitin. It is awarded for achievements in the field of social journalism.
X