Results of year of SSAU: for the benefit of science and education 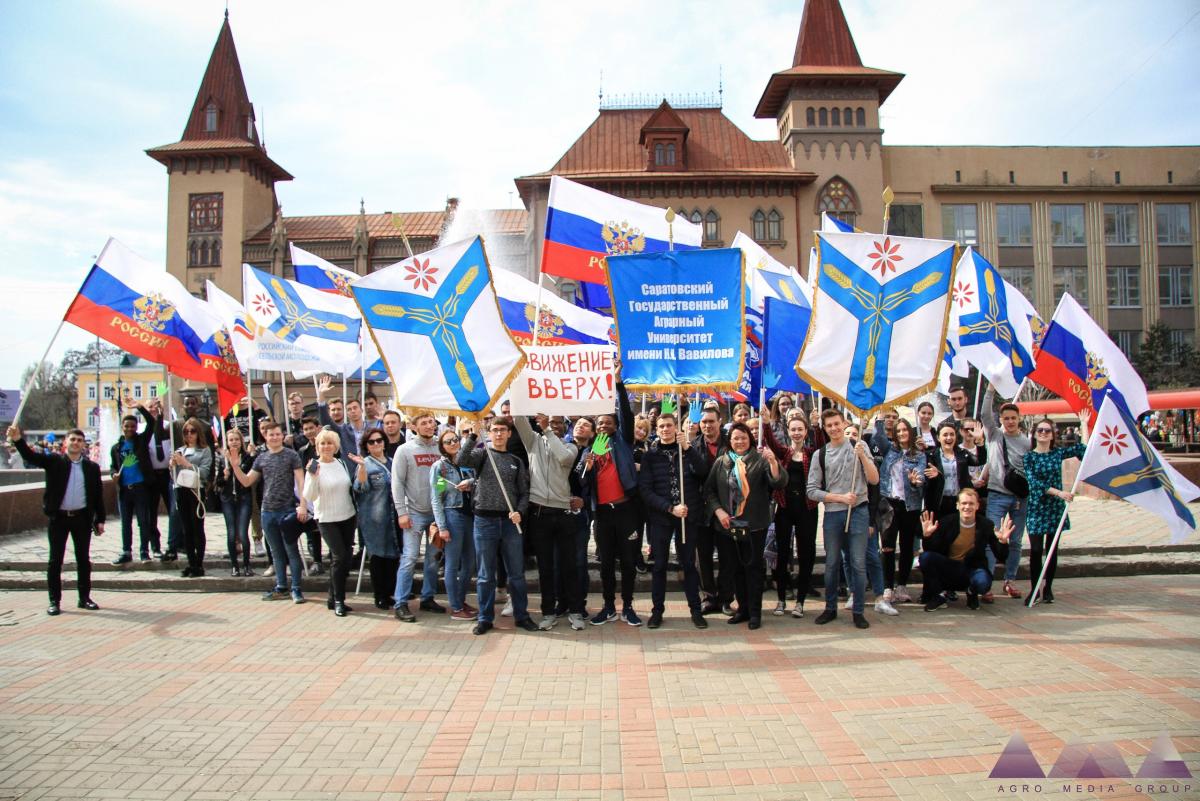 Life of the university is inseparably linked with region life. Today nobody doubts that in achievements of agro-industrial complex of area there is a significant contribution of scientific SSAU.

According to the governor of the Saratov region Valery Radayev, the big contribution to achievement of good results of development of agro-industrial complex of area in 2018 belongs to scientists of agricultural university.

So 2018 began …
Today SSAU of N.I. Vavilov which is headed by the rector the Chairman of the Committee of region Duma on agrarian questions Nikolay KUZNETSOV, is one of the first agrarian higher education institution of the country. Here more than 11.5 thousand young people gain knowledge.

The geography of students is presented by 34 regions of Russia and 38 foreign countries, including 30 from foreign countries. Applying the most modern pedagogical technologies and paying special attention to practical training, the higher education institution not only cooperates with leading enterprises agrarian and industrial complex of the region, but also creates production and exhibition sites on own base: for example, educational scientific-industrial complex "Agrocentre", "Food industry worker", veterinary hospital, 17 small innovative enterprises.

The contribution of higher education institution as education, scientific, research center plays an important role in development of the agrarian sector of our area.

What 2018 did become for students and teachers, young scientists and in general for all university?

Numerous events of high school, regional and federal levels which participant was Saratov SAU, say that this year is significant in the history of agrarian higher education institution.

In 2018 three young scientists — doctors and candidates of science became winners of a grant of the President of the Russian Federation. It is the highest rate among all agrarian higher education institutions.
In February with assistance of council of young scientists of the university and the Saratov regional office "Russian union of rural youth" in the Saratov SAU the VI intellectual game "The Beginning Farmer" took place. Support of talented youth, increase in the general level of her knowledge of a possibility of the organization of peasant farm within the program for granting grants on support of the beginning farmers — the State program of development of agriculture and regulation of the markets of agricultural products, raw materials and food for 2013-2020 became its task.

in 2018 in the "Agriculture and Agricultural Sciences" direction the university took the highest positions. Among all higher education institutions of Saratov following the results of this rating the university is in the second place.

Let's remind that annually more than two thousand higher education institutions participate in the National rating of the universities. The main criteria by drawing up rating are the quality of training, scientific activity, international relations, demand employers of students of higher education institutions. The appreciation which was given to our agricultural university once again emphasizes his leadership skills.
In 2018 the university became the winner of the All-Russian competition of youth projects among the educational organizations of the higher education of Federal Agency for Youth Affairs.
In August young scientists, graduate students, students from Volgograd, Vologda, Belgorod, Moscow and also Novosibirsk, Yakutia, the Republic of Kazakhstan and other regions of Russia gathered on the "Chardym" university base within the Scientific Wave project. Total number of participants are 125 people.
Within the program discussion platforms, competitions, the presentations of information and analytical projects were organized. The Scientific Wave school this year again showed that the youth is in agrarian science and education actively interested, and professions in the agrarian and industrial complex sphere become more demanded every year.
And in September students and young scientific SSAU, SSTU and SSU went to the expedition " Vavilov`s Roads" to the Crimea organized by the Youth center of research expeditions to the fields of agrobiological sciences of the Saratov SAU. This year the expedition took place already for the third time. But if in previous years financing was carried out only at the expense of the university, then this time grant support of Rosmolodezh allowed to hold this event more on a substantial scale. It was the long, but not boring road, the camp, the field kitchen, campaigns on mountain tracks, excursions in historical places, field experiments and experiences, seminars and master classes of teachers experts and the sea of new impressions.

Once in far 20-30 years of the last century the scientist Nikolay VAVILOV was faced by the purpose: to collect samples of wild relatives of cultural plants, to make a collection for its further use for selection and removal of new grades. Today, as far as it is possible, repeating a way of the great scientist, the Saratov students and young scientists-landowners, using information of Institute of crop production, study flora. Exactly there took place speciation of those plants which then the person began to cultivate and remove the new, adapted to local conditions grades.
The Saratov SAU is the center of gravity

In 2018 the university celebrated the 105 anniversary from the date of opening of the High agricultural courses in Saratov. The action took place in the territory of UNPK "Agrocentre" Korolkov a garden. Not only employees and students of the university, but also residents came to the celebration of anniversary of SSAU. As well as it is necessary, on anniversary congratulations of distinguished guests sounded, gave presents. The rector of the university Nikolay Kuznetsov awarded with certificates of honor of the students who proved in public, sports, scientific and creative life of the university.

The big celebration this year was held at faculty of veterinary medicine, food and biotechnologies which was 100 years old. The Alma Mater of veterinary science of the Saratov earth grew many great scientists and dear people.

Now the faculty is one of the leading scientific education centers in the sphere of agro-industrial complex. The structure of faculty includes six departments, eight scientific laboratories and the centers, two centers of collective use, five small innovative enterprises and two dissertation councils.

One more date which brought together all scientific community of the region in agricultural university: in 2018 20 years of "Agrarian Science and Education" association were executed.
The association is formed in 1998 at the initiative of the management of the university together with the leading research establishments of area. The association remains the only non-profit socially oriented organization in the Russian Federation such to this day and serves as the major link in carrying out complex researches on current problems of regional agrarian and industrial complex and also one of effective mechanisms of interaction of science and production.
In 20 years over 250 methodical recommendations are published, economic effect in several billion rubles is gained. Results of researches are introduced more than in 100 farms of the Saratov region.
In July on the basis of the university there took place the VII summer Universiade of higher education institutions of the Ministry of Agriculture of the Russian Federation. More than 1500 participants from 38 agrarian higher education institutions of the country participated in it. The national team of the university became the six-time champion of summer Universiades.

The university carried out a grant on implementation of the international project "Continuous Training for the benefit of Sustainable Development" in consortium of the partner universities from Poland, Portugal, Austria, Sweden, Ireland and Kazakhstan. Within the priority project "Education Export" the university became the only higher education institution of the Saratov region which was a part of Consortium of the basic educational organizations — exporters of the Russian education consisting of 39 leading Russian higher education institutions.
Roads of the academician Vavilov

The unique project of the Saratov SAU — the international student's Vavilovsky Olympic Games. In 2018 18 teams from Moscow, Kazan, Stavropol, Oryol, Michurinsk, Penza, Samara, Volgograd and Saratov participated in this holiday of science.

The international scientific and practical conference "Vavilov`s Readings-2018" which took place on November 28-29 became the real holiday for the university and all scientific community of the city. Many outstanding scientists in the field of selection, genetics, biotechnology, protection of the plants and other scientific directions developing the ideas of the great scientist participated in the conference devoted to the 131st anniversary since the birth of the academician N.I. Vavilov. The plenary session of a conference was opened by the rector of the Saratov GAU N.I. Kuznetsov who emphasized that at our university development of the ideas of the great scientist is conducted constantly.
Achievement of height

In September in Theatre for Young Audience of Yu.P. Kiselyov the awards ceremony of the best high school teachers was held. The ceremony takes place the third year in a row within the festival of first-year students "Went!".

Awards of 100 thousand rubles everyone and a figurine "Height" received 24 scientific and pedagogical workers from 8 higher education institutions of area.

The award "Height" noted work of three teachers of the Saratov agricultural university: professor, dean of faculty of veterinary medicine, food and biotechnologies of Alexey MOLCHANOV, associate professor "Crop production, selection and genetics" Oksana TKACHENKO, associate professor "Forestry and landscape construction" Alexander TERESHKIN.
Our university is the leader of agrarian education in Russia. Joint efforts of the faculty, employees and the management we show good result in the rating of higher education institutions of the Ministry of Agriculture of the Russian Federation again and again — the rector of the Saratov GAU of N.I. Vavilov Nikolay Kuznetsov says. A big merit in it and our students striving for knowledge, kind and sympathetic, talented and sports.

The agricultural university will actively develop and have also further the increasing impact on social and economic development of the region and Russia in general. Our collaboration for the benefit of the region and Russia will allow to provide the population with quality and safe food, to create a favorable social and economic environment and to provide stability and confidence in tomorrow.

Results of year of SSAU: for the benefit of science and education. Фото 1

Results of year of SSAU: for the benefit of science and education. Фото 2

Results of year of SSAU: for the benefit of science and education. Фото 3

Results of year of SSAU: for the benefit of science and education. Фото 4

«СГАУ» / News / Results of year of SSAU: for the benefit of science and education