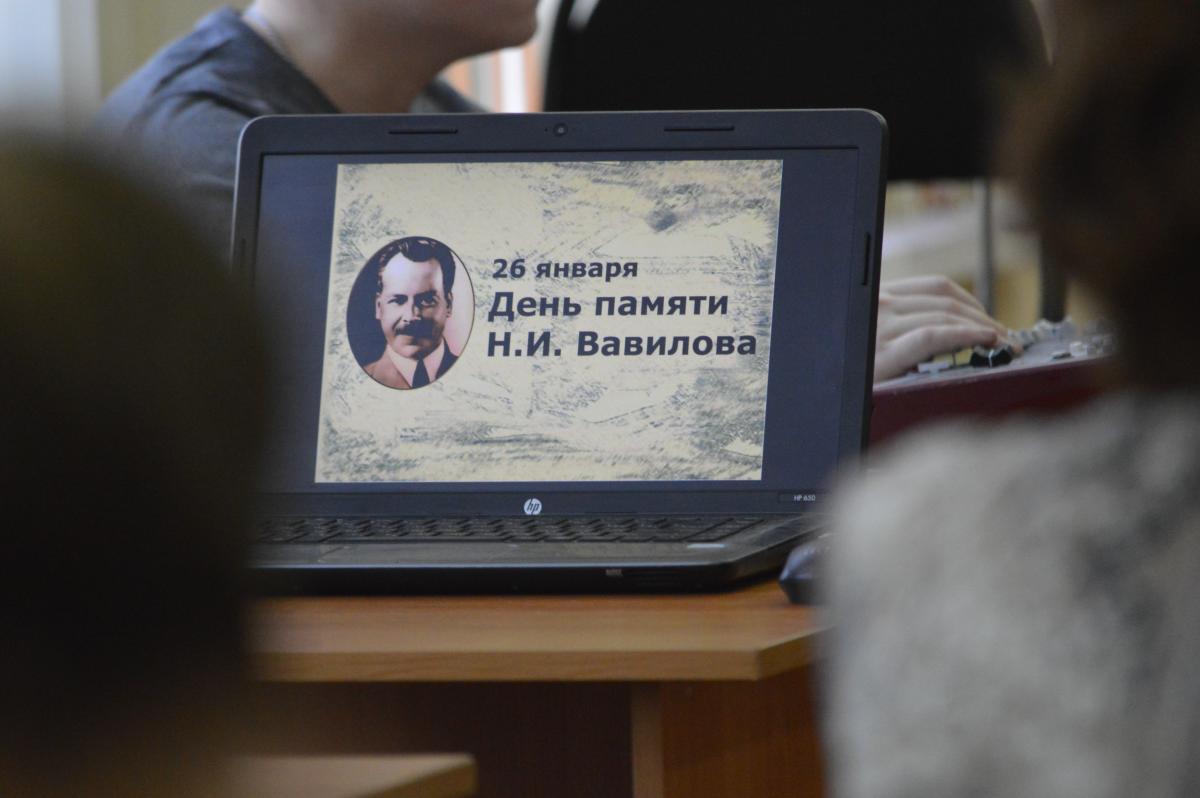 January 26 marked the 75th anniversary of the tragic death of Nikolay Ivanovich Vavilov.

In honor of this memorable date a memorable meeting was held in the auditorium named after N.I. Vavilov. It was attended by about 90 people from SSAU named after N.I. Vavilov, SSU named after N.G. Chernyshevsky, Research Institute of Agriculture of the South-East region, Rossorgo, the State Archives of the Saratov region, Saratov Regional Library of childhood and youth named after A.S. Pushkin, representatives of schools and colleges of Saratov, etc. The program of the "Memorial Day" included scientific reports and messages, as well as creative performances. The meeting was opened by N.I. Kuznetsov, the rector of the University: “It is very important to remember your history. The life path of academician Vavilov is an example for us. His tragic fate, like the bright beginning of the scientific path, is connected with Saratov. It is our duty to preserve and develop the heritage of a great scientist.” Representatives of the Saratov Regional Museum of Local History - L.Ya. Solomonova, Deputy Director for Development and N.M. Pantheeva, Head of the Department of Nature in their speech focused on the issue of preserving the memory of a great scientist. For many years the museum has been working on the acquisition of the Vavilov Foundation; a permanent exhibition dedicated to the great scientist is created. By the day of memory a special exhibition has opened in the museum. By the last 130th anniversary of N.I. Vavilov a unique catalog of the Vavilov collection was issued. Scientific reports on the fate and work of N.I. Vavilov were made by: N.V. Ryazantsev, head of the memorial cabinet-museum of N.I. Vavilov, V.I. Stukov, honorary professor of Saratov State Agrarian University, G.E. Ryazanova, honorary professor of Saratov State Agrarian University, V.I. Fedoseeva, associate professor, candidate of historical sciences. The creative program included the performance of classical music, romances, and the reading of poems by favorite authors of N.I. Vavilov and related to the topic of the meeting. Author poems dedicated to the great scientist were also included in the program.

The creative part of the program was prepared by activists of the Saratov Regional Rubtsovsky Center, employees of the Saratov State Conservatory named after L.V. Sobinov and the Saratov Regional College of Arts. For the help in participation in the memorable meeting, all the speakers were awarded with the diplomas of the rector of Saratov State Agrarian University. The rector N.I. Kuznetsov awarded L.L. Chirkova, the head of the Rubtsovsky center, a candidate of philosophical sciences, a member of the Union of Journalists of Russia with Gratitude and expressed hope for further cooperation in preserving the heritage of the great scholar and cultural education of young people.
X