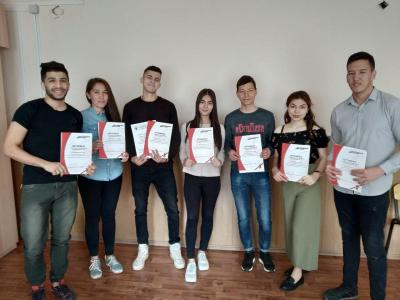 Last Monday, the Institute of International Educational Programs awarded the participants of the “Total Dictation - 2019”, who wrote the TruD test with the result “excellent” on April 13, and their teachers. Total dictation - TruD is held at our university for the second year in a row and is a test specially prepared by the organizers of the international action for those who study Russian as a foreign language.

At the preparatory department of the IIEP, citizens from Egypt, Morocco, Congo, Benin, Turkmenistan, Uzbekistan and many other countries are trained annually. Of course, it would be difficult to achieve high results in learning the Russian language if foreigners did not have talented teachers who love their work. Gratitude for the training of foreign students who received certificates of “honors pupils” was awarded to the teachers of Russian as a foreign language by Simanina Yu.B., Khovalkina G.V., Avdeeva NP, Safronova Ye.L., Shindina N.V.

The organizer of the TruD test on the site of our university A.A. Matveyeva noted that the participants had to write a rather difficult test this year, and all the more significant that the “honors pupils” showed good results.